We have been doing really well on our trip preparations. We have been able to get out for several nights and test everything out in the truck. We have been making lists of things that we have forgotten or need modified as we have been using the truck. It turns out that the lists are pretty short and nothing major has come up. The biggest thing that we have noticed is that the habitat is very comfortable and we seem to sleep in more than we mean to!

The truck has been performing better than expected on the highway. It cruises comfortably at 60 mph at 4,000 feet elevation. Exhaust gas temperatures have been really reasonable so far, even pushing it on hills we haven’t seen it go above 1200 F. Slight hills seem not to affect the cruise speed much, but steep hills do require downshifting to take advantage of the grunt of the diesel. All the sound deadening and upgrades in the cab were well worth it. We can carry a normal conversation while driving on the highway. It’s not much louder than driving our Jeep Wrangler.

We extended the ARB awning for the first time and enjoyed some shade in the desert on one of our trips. The ARB awning is quite nice, but we did have to take it down when the wind picked up. The awning can be set up with one person, but we found it is easier with both of us.

During our trips we were able to try out our OMNIA oven with our alcohol stove for the first time. It worked really well! The alcohol stove has been performing great in general. They seem to have a reputation for slow cooking, but we haven’t been disappointed.

Not that anything about using the truck is difficult, but we have found that there are enough new things that we were forgetting steps when getting ready to go. Being the aircraft engineering nerds that we are, we have now made checklists so we don’t miss anything. It’s probably overkill, but it makes us feel a bit more relaxed when doing things like leaving after tearing down camp.

The painted lady butterflies are migrating from Mexico to the Pacific Northwest through central California right now. It seems that they are following the good weather. It’s probably a sign that we need to get ready to follow them. 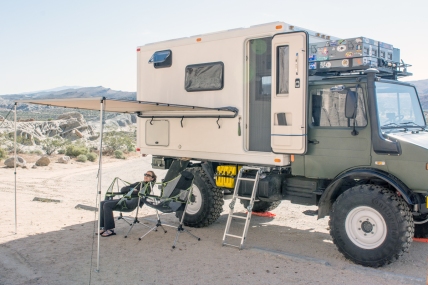 It’s hard to believe that we reached the Arctic Ocean in Tuktoyaktuk over 2 years ago. After spending over a year and a half building the truck, it was fun to be one of the first vehicles to reach the Arctic Ocean in 2019 when the Arctic river crossings first opened along the Dempster Highway. It sure has been a crazy 2 years since then. We are thankful we were able to have this experience.
This was a great rainbow that showed up as I was out working in the orchard.
These are just a drop in the bucket... there is no way we could eat all the ripe citrus right now.
There is a lot of ripe citrus in our orchard right now: tangerines, oranges, and lemons.
It's been fun harvesting food from around our property. Hopefully there will be a lot more of that in the future.
We are loving the weather here. The highs have been in the upper 70s (F), and the nights are nice, cool low 60s (F). It's been fun getting a little bit of food from our property. The orchard in the back is full of citrus right now, and we were able to harvest a small bundle of bananas the other day. They are now hanging from our porch ripening. We think they are a type of apple banana. They are very small (2-3 inches long, about 1 inch in diameter) and very tasty!
We shipped all of our household goods to our new home in a 20 foot sea container. This is the container sitting in our new driveway. It's super green here!
We haven’t posted in quite a while, but we are doing well. Amongst all the chaos of 2020, we were able to move to our new home on the big island of Hawaii. We are really enjoying the weather and greener environment. It’s a 512 square foot fixer upper on a 3 acre lot with tons of mature fruit trees.
We added the finishing touches to the custom cab hardtop this week. The outside got a nice, glossy coat of white paint and we put speckled texture paint on the inside surface. It looks really sharp.
Loading Comments...
%d bloggers like this: